The History Of Flight Suits 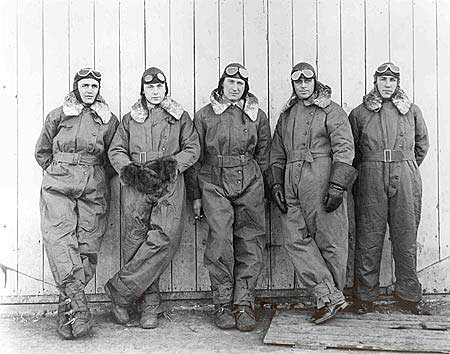 In the very early days of aviation, pilots didn't use flight suits. They more often than not would wear wool-lined leather coats. For every 3,000 feet of climbed altitude, oxygen levels would lower and the temperature would drop by 5 Degrees Celcius. So the early day pilots were always cold and at risk of losing consciousness due to lack of oxygen. The first-ever concept for flight suits appeared during the first World War where heavier clothing was worn to protect piolets from the cold. At the time, these suits were almost entirely made of wool and could adapt to all different forms of body types. But along the 1920s, flight suits started including oxygen masks as well as a thermal protection lining but they still offered no protection against electrocution. In 1934, the pilot Wiley post broke the speed record while flying from the west coast to the east coast. To try and fight the cold of the higher altitudes he had a tailor make him an airtight suit that was warmed by the exhaust from the engine of his plane. the suit he had made included three layers: Longer underwear, a black rubber layer that could support the pressure, and an outer layer made of rubberized materials. Even though this suit was not particularly safe it did get the job done when it comes to the early days of technical flight clothing.

During the Second World War and in the 1960s, experts started developing flight suits that are similar to the designs of the ones we use today. They started designing suits with comfort more in mind so these flight suits were more ergonomic to suit the pilot. It wasn't until later that flight suits began being able to resist extreme conditions such as a fire.

"Today, the Nomex flight suit is a one-piece uniform that is worn by pilots and crew alike in most branches of the military. It is not only an incredibly durable fabric but most importantly, the aramid fibers that are in the Nomex material are fire-resistant. Making sure our military personnel are protected from danger is Carter’s primary goal. We at Carter NY take great pride in producing the Nomex flight suit and making it readily available to the men and women who serve our great country. When the soldiers wear our product, they know that they can fully concentrate on their mission and can rest assured that they are wearing a fire-resistant suit from a company that has their safety in mind." -Carter Industries

As with the unique history of American Aviation, the history of the Nomex Flight Suit is intriguing and continues to not only meet military expectations but supersedes them as well. If you want to check out some NOMEX flight suits, click the button below. In consideration of the fact that these flight suits are used for often dangerous flights, manufacturers ensure that they are fit for usage. Flame-resistant material covers many of the hazards associated with potentially dangerous situations, but there are also factors such as its temperature-resistant properties. The Nomex flight suit can tolerate temperatures of up to 5720 ° F and will not experience molecular modifications when subjected to such temperatures as melting.